Cookie preferences
This website uses cookies, which are necessary for the technical operation of the website and are always set. Other cookies, which increase the comfort when using this website, are used for direct advertising or to facilitate interaction with other websites and social networks, are only set with your consent.
Configuration
Technically required
These cookies are necessary for the basic functions of the shop.
"Allow all cookies" cookie
"Decline all cookies" cookie
CSRF token
Cookie preferences
Currency change
Customer-specific caching
Individual prices
Language detection (Shop select)
PayPal payments
Selected shop
Session
Comfort functions
These cookies are used to make the shopping experience even more appealing, for example for the recognition of the visitor.
Note
Statistics & Tracking
Affiliate program
Track device being used
Change language:
Categories
Information 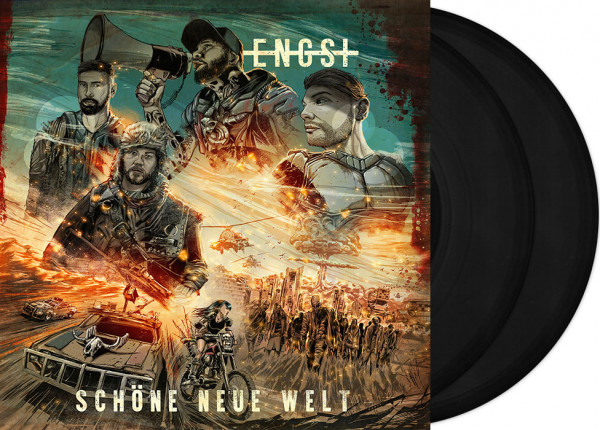 "We've always been indifferent to what the masses think. As long as you want us, we'll come back. We're back!"

Confident and authentic, ENGST is back with the new single "Wieder da". Their eagerly awaited second album "Schöne neue Welt" is now available. ENGST are ready to continue what they started with their successful debut album "Flächenbrand".

Consisting of a troupe of close friends, which joined together around frontman Matthias Engst, ENGST are authentic children of Berlin - distinctive, rough and down-to-earth. To this day, Matthias Engst lives in the problematic district of Berlin where he grew up. His experiences there in his youth, the roughness of the district and the love for his home, are basic elements in the songs of ENGST. They are socio-critical without losing respect for their origins.

While the band was still under time pressure on their debut album "Flächenbrand" and put the finishing touches on some songs in the hours before they set foot in the studio, ENGST took all the time necessary for "Schöne neue Welt" to let their feelings between anger, doubt but also deep friendship and solidarity flow into the music. So ENGST sum up: "... there is again a very clear edge, which we drive and enough in our society what is to criticize. We take it all and throw it right in their face. But still, what would ENGST be without friendship, cohesion and love". Ironically fitting was the oppressive feeling of the Corona lockdown at the time the album was recorded, and so the second studio album turns out to be much harder and more complex than the previous one, but still catchy, as usual socially critical and above all: right into the face.

With their mixture of German rock, punk and catchy tunes, which were recorded at the MixBerlin studio, the band welcomes their fans 'Welcome to Berlin'.
With fast and driving riffs ENGST never minces its words. The special highlight of the album is the modern rock anthem 'Keinen Meter', with which the band clearly speaks out against fascism and ignorance in our society and also joined forces with US metalcore titans EVERGREEN TERRACE for a spectacular collaboration. "The feature with EVERGREEN TERRACE means so incredibly much to us", reports ENGST. "Anyone can buy a feature here and there to present themselves to a wider audience. But when hardcore legends from the States volunteer to do so, it's a bold statement and an incredible honor!"

* All prices incl. VAT within the European Union plus shipping costs and possibly cash on delivery charges, if not described otherwise.

Copyright © 2023 - Out Of Vogue. A division of F&M Feral Media GmbH. All rights reserved.

This website uses cookies, which are necessary for the technical operation of the website and are always set. Other cookies, which increase the usability of this website, serve for direct advertising or simplify interaction with other websites and social networks, will only be used with your consent. More information
Decline Configure Accept all